Lithuanians in the Army

The term 'Russian Pole' is one that is used a lot as you trawl through the archives of the Dalkeith Advertiser, I remember the first time I saw and thinking what a strange handle, and as it turns out inaccurate one. Everbody born in Newtongrange of a certain age probably knows at least one person of Polish descendency, I am no different. What I did not realise was that most of the Poles moved to this area circa WW2, the previous immigrants were in fact Lithuanians and possibly the odd Latvian and Ukranian. Poland around the turn of the 20th century did not exist as an independent country and was under the rule of the Russian Czar.

To understand the high number of Lithuanians in Newtongrange you have to look at the history of the Lothian Coal Company, the company exported coal to the Baltic nations via coal ships from Leith, at this time Newtongrange was expanding rapidly due to the building of the Lady Victoria Pit, one of the deepest mines in Britain. The Lothian Coal Company needed huge amounts of labour and authorised the 'importation' of Lithuanians and Latvians to Newtongrange for mine work.

The individuals concerned were told they would be given passage to America in return for work, however the ships pulled into Leith docks and the human cargo unloaded. These poor people had no real knowledge of where they were, none could speak English ,let alone read or write in it. They were offered a house and a job 'doon the pit' , under the circumstances most readily accepted and moved to Newtongrange in their hundreds by the start of the Great War. Many more also went to Bellshill in Lanarkshire and to Ayrshire to work in the pits.

The Census of 1901 states that some 3456 foreigners in Midlothian, a large percentage of them being 'Russians', in Lanarkshire the number was even greater at 13,438.Initially most kept their proper names, but a gradual process of Anglicisation took place and names like Smith, Brown and Millar fell into common use, also Scots names like Campbell became Campbellski, through time the 'ski' suffix disappeared and so in essence did the Lithuanian.

In 1915 large numbers of 'Russian Poles' volunteered to join Macrae's battalion of the Royal Scots, it appears that despite their offer of service they were refused at this time due to their nationality. They were also required to register their staus as Aliens with the local police.

The following clippings appeared in the Dalkeith Advertiser. 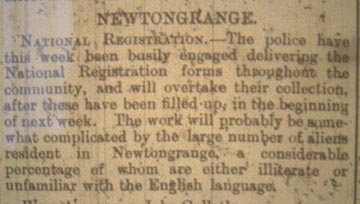 It would seem that most of the Lithuanians entered the army post 1916, by 1917 an entente called the Anglo Russian Military Service Convention, had been agreed between Britain and her ally Russia whereby men of either country could be conscripted in the others' army. As a result in late 1917 huge numbers of Lithuanians and other nationalities were absorbed into the British Army as they were classified as Russian Citizens, many have their place of birth recorded as Suwalki, Russia. 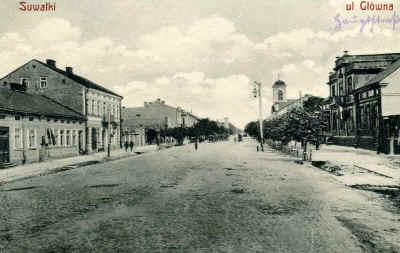 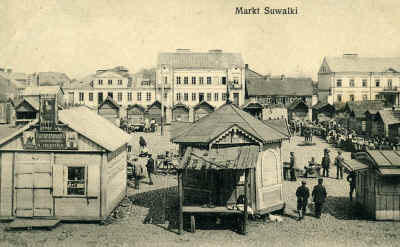 As agreed though not all the men entered service with British , they exercised their option to join the Russian forces on the continent and there are reports of large groups of men leaving Newtongrange by train to do just this.

A local historian Alex Mckinnon has found a number of references to Russian Poles on the poor register, as their husbands were away fighting in France,I cannot say conclusively how men from Newtongrange were away but suspect that it maybe around the 100 mark with UK forces with a further unknown amount with the Russian Army. In November 1917 our Russian ally was sent into turmoil by the Revolution,this had the effect of splitting the Russian Army in to the Reds and the Whites. The Whites allied to the British and others the Reds did not.

As a consequence the British began to remove large numbers of  'Russians' from combat units and transferred them to the Labour Corps , possibly as their allegiances were now deemed to be suspect.

Jouzas Sanalitis killed in action 3rd May, 1918 whilst serving with the KOSB.

By the end of the war four Lithuanians had died for their adopted country in the British Army. I believe that more may have died whilst serving with the Russians but cannot corroborate this at present, others simply returned to Lithuania at the end of the war and had their familes rejoin them there. Their fate is unknown.

You can see the men who served in the Nominal Roll or the Roll of Honour , however if you wish you can view them also by clicking here.