The one in a million man

Firstly can I start by saying that in my humble opinion any man that goes to war and withstands the horrors and hardships of war is a hero in my book. However it is fate that some men's actions will bring them to the fore and they will be awarded a medal. Here I have tried to record some of their achievements.

James was born in Aberdeenshire and moved to Newtongrange as a teenager where he settled and became a miner with Lothian Coal Company on leaving school. He married and settled at 48 Abbeyland ,Newtongrange and was a member of the St Mary's Masonic Lodge,Newtongrange .

In 1915 he enlisted in the Seaforth Highlanders and went to the Western Front in France where he commenced a distinguished military career. He went on to win the DCM and Bar and the Military Medal and Bar, an achievement only matched by 5 other soldiers in World War One, literally one man in a million and the only Scotsman to be awarded these Honours. It is said that this combination of medal is 30 times rarer than winning a VC, I think that sums up his courage. Here are the citations for his DCM and bar it was customary not to have citation for Military Medals. His Military Medal and bar were for recovering men under fire and tending their wounds, the first time at Delville Wood,1916, the second at Vimy Ridge in 1917.

For conspicuous gallantry and devotion to duty. After his platoon commander had become a casualty, he led them with great skill and gallantry to their objective, which he consolidated under heavy machine-gun fire. When hostile fire caused his platoon to cease work, he immediately led four of his men to a position from which he could enfilade the enemy machine-gun, which he and two others then rushed and captured, having killed two of the team by rifle grenades.

For conspicuous gallantry and devotion to duty. Throughout a week's fighting this N.C.O. set a fine example in organising the men in trying situations. He rallied a platoon of another unit which was withdrawing leaderless, and put it in position. He reorganised fragments of another brigade. By a personal reconnaissance he obtained good information and placed troops to cover the flank. He brought a wounded man out of action on his back, and on every occasion used his rifle with good effect. 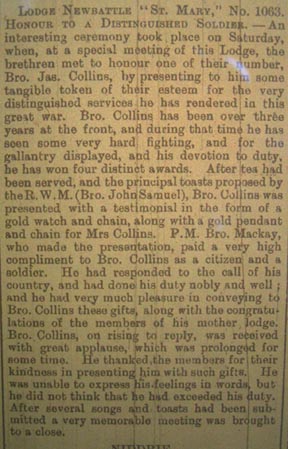 He would end the war as a Sgt and survive, returning to work in Lady Victoria Pit as a fireman *

*A fireman in the pit was responsible for the handling and setting of explosives for extracting coal.